The story of a forgotten toothbrush 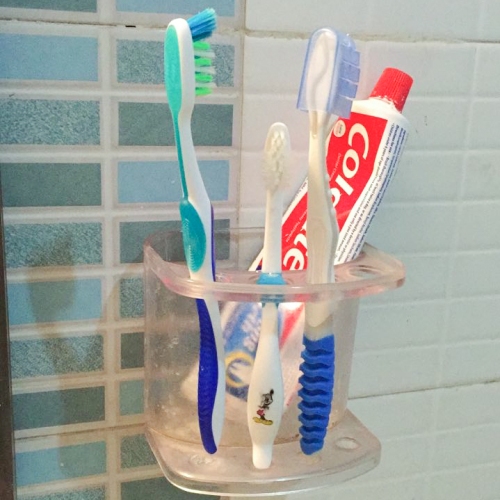 My 5 year old nephew is very attached to me and whenever I visit my sister, leaving from there is a heartbreaking task.

It is still easy for me as I leave but it becomes very difficult for my sister as for the next two days or so Arjun stays angry at the fact that maasi left.

This time I was there for 4 days and was coming back after two weeks. So I had left one of my suitcases at my sister’s place. I left when he was still in school and we said nothing to him the night before. When I was at the airport, it struck me that I had forgotten my toothbrush in the bathroom and will need to get one more. My thought was just that of the inconvenience it caused… but I never thought how that little forgetfulness will play out.

When Arjun came back from school, didi tried to explain to him that maasi has gone to Pondicherry and she will come back in 2 weeks. “See her suitcase is also here!”

He didn’t look at the suitcase but asked if the toothbrush is there and ran to the bathroom that he, his granny and I shared. He saw the toothbrush there and he was fine. Completely assured that maasi hasn’t left for good and that she will be coming back for her toothbrush!

Sometimes it is just amazing the linkages kids make. I never thought my brush lying next to his would matter so much to him or that was a reassurance everyday that maasi is still here..

I wish we could all just remain children :-).

Education in the 21st century!

Education today we know is very competitive, especially in a country like India where the ratio of good schools to students is very disappointing. One will be shocked just to see the admission process for a child entering into kindergarten. While the government has rules about not questioning a child so young, the process now targets the parent. And children are also not technically left out of the whole process.. They have to come for what many schools call an “interaction day” where the teacher observes the child in a play room or a library in the school and judges his/her .. I don’t know what.. attitude? Aptitude?. For a child as young as 4 years old, what do we mean by attitude or aptitude? Or any other skills for that matter? How do you make sure a 4 year old understands that s/he is being watched over.. s/he may not just be in a mood but schools still insists and the parents comply and the child does his/her own thing.

My sister is currently filling up forms for my niece’s admission and also “preparing” her for the “interaction day”. I’ll just recall some of Nandini’s preparation here:

Mummy: Nandini what is your mother’s name?

(We all laughed at that but my sister was obviously not amused.. she was too tensed to appreciate the humour or the innocence in that reply!)

Mummy: Nandini can you sing me a poem?

Nandini: Which one? Twinkle twinkle?

(she started rhyming the tune of the poem…)

It’s not that she didn’t know the poem, but she was not in a mood and how do you bring a child of 3 years in mood to sing something she doesn’t want to?

Before interaction, comes the parents’ screening.. Their education, profession and their ability to write essays! That would mean if I’m uneducated, I have no chance of getting my child into a good school and why? Because I failed? So my child suffers.. and even if I write that essay and still my child doesn’t go through, it’s my failure again!

So here is a question from the application form for a particular school for my niece’s admission:

Please share with us your thoughts, beliefs & expectations about the relative roles of parents and educators in bringing up children effectively in the 21st century.

But then the schools may also say that faced with so many admission requests, they need to have some sort of criterion for selecting children. But in doing so they are denying a right to good education to many children. In my opinion the problem lies not in the admission process, but in the education process itself. Why can’t all our schools become the ‘good schools’? With education becoming a booming industry; with more and more people entering the so-called ‘upper middle class’; the distinction between schools will continue to exist and so will the pressure on parents and young children first to get admission and then to excel. Ranking in schools is another topic, which can trigger hot debates but I would rather not talk about that now and think about an answer to that question now!