I am back in Luanda now… I am back at work but my mind still feels like it stayed behind in Capetown. We left capetown yesterday morning with a promise to return. And we have to return because the city has so much and we experienced so little.

We reached capetown around 6 pm. .. got late in leaving from Somerset mall and then got stuck in the traffic outside the city. We arrived at Blackheath lodge,  and were greeted by, Godfrey, one of the friendliest of faces :). After checking in and a warm shower we decided to walk to the V&A waterfront. We had just two days and it was also the end of vacation so we wanted to take  it slow and easy… capetown is flooded with things to do and it’s difficult to choose but we had decided that in this trip we wouldn’t stress ourselves in going from one point to another..

First evening was a leisure walk along the beach road from 3 anchor bay to waterfront and then a bit pub hopping and a quiet dinner.

The next day we wanted to go to table mountain but the cable way was closed and we had no enthu for a trek up right now. We did the drive along the cape peninsula, stopping at the beautiful bays in between. The drive is amazing (and with well placed viewing points to get the best views of the scenery). We stopped quite often (again!), just sat watching the ocean and the mointains and the city from a distance and of course clicked a lot of pictures :).

All the way to cape point, we felt like stopping every few moments and take in the beauty of this place. At cape point, there is a lighthouse which is also called the ghost lighthouse… When it was built, it could hardly ever signal the ships of the approaching land because most of the times it was covered in clouds. Much later a new light house was made a little below.
Cape point is also the point where ‘the two oceans meet’. That’s the tag line as well! Standing at the lighthouse and looking towards the ocean one can see the difference in the colour of water on two sides. It should be due to the difference in depth but I am not sure if that is really the boundary. Actually how are the boundaries of oceans determined anyway? I would love to read more on that.

For us the most striking  or rather beautiful feature of cape point was the views of cape of good hope from there..The most stunning views we had seen on the whole drive.

From cape point we then headed to the cape of good hope and I said I would have preferred spending more time looking at it from a distance than being there. But you do check on being at the southwesternmost  point of the African  continent. If that matters :). 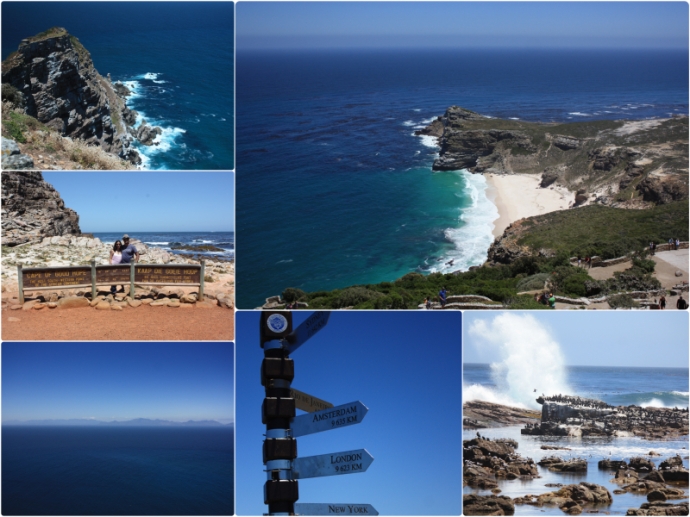 On our way back, we stopped at Simon’s  town for lunch and then went to see the penguins at boulder penguin colony. As soon as we entered the park we saw two penguins and got crazy with clicking their pictures only to be super awed by a whole colony of them just a few steps ahead. Super cute animals… i just enjoyed them dping their different tactics… and they swim so so fast! And once on shore they will try to dry off by shaking all the water. Amazing.

Then we headed to signal hill – the view point for table mountain and in a way for the whole of capetown city. We saw the sun set from up there, walked around a little. The beacon of hope that shines over capetown is also right there. It’s a solar powered huge star that is made from the recovered railing around Robben Island.

For dinner, we went to an Indian restaurant – Bukhara. It’s right in the city center. Our hotel owner had suggested it and I really wanted some nice dal makhni and butter naan! :). Sikander enjoyed his nihari. I think we over ordered because with some more rice or bread two more people would have eaten. Sikander decided to do just that :). He ordered one more plate of rice and asked our waiter to make two take aways – one veg and one non-veg. On our way back we gave one the guy helping cars park on the street and one to our taxi guy. Our taxi guy was so moved that he didn’t even start his meter. He said “what can I charge you when you have already given me dinner. You give me what you feel like.” 🙂 the guy was from Congo trying to make a living here.

The next day – our last day – we just wanted to explore the city center. During breakfast we checked the cable way and it was open.. but with some difficulty we decided to let it go and keep it for the next time…

After breakfast, we first finished all our packing so that we can have a relaxed evening and as our flight was at 6 am there wasn’t much time to sleep also. Then we left for the city center.

We first went to the district 6 museum – a museum dedicated to the apartheid history and people’s  struggle to have a place and rights on their own land.
A sadness enveloped me as I walked through the personal pictures and texts in the District 6 museum.

“You are now in Fairyland”
The handwritten text that one of the residents must have painted echoes what the neighbourhood meant for them. What their homes, their neighbours’ homes, the families all shared together. A fairyland.
Photographs of girls playing with skipping ropes on the streets outside their homes, of mothers with their babies, of daughters with their dolls, of family dinners, of boys making mischief – all of them transported me to that time and place. And slowly I felt anger and pain on being asked to leave my home. My fairyland being destroyed and grazed down to become a white neighbourhood. Why is this suddenly a “whites only” place and people who have been calling it their home for generations have no longer any right to call it so.

After district 6 museum, as we were walking in the city, we came across the slavery museum. Another sad encounter with our history. Pictures and accounts reconstructed from what was told. The sad thing about slavery is it still exists.. In my own country, bonded labour is still practiced openly… family members are still sold…trafficking is a whole racquet  and in so many more invisible ways..

By this time we were hungry so we walked along.. and came across a sign of masala dosa hanging on our heads :). And masala dosa it was. The place is mentioned in lonely planet  but seriously there wasn’t much to it. The dosa were good but the chutney and the filling all were bland and lacked a flavour. But for me, who hasn’t had a restaurant style big dosa in ages, it was good. 🙂

Afterwards we went to company gardens.  Sat on a bench where sikander read his book and I took a siesta. There is a cute cafe as well inside the garden… 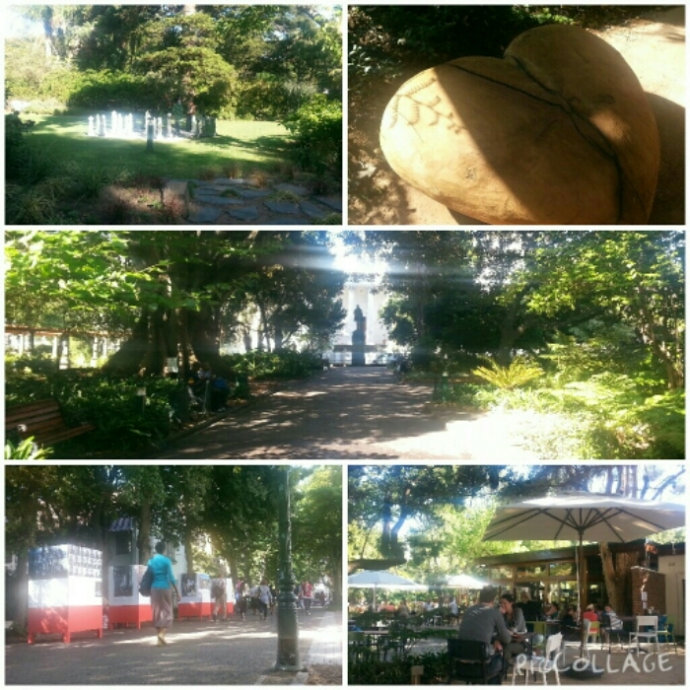 Later in the evening we went to Beerhouse, a place that prides itself for having 100 types of beers. Another waiter at a restaurant had earlier suggested us this place. What was great for me was that they had 100 ml size as well so one by one, I could taste many :P.

From there we walked to the waterfront and a mohito later our last evening in capetown was over.

The next morning we boarded the flight making a promise to the city that we will be back.